One Day with React Native for Android

I was extremely excited on Monday to hear that React Native for Android had officially been released. I’ve been looking forward to playing with it for some time, and finally have a chance.

After spending most of a day implementing a toy project using the framework, I have some initial thoughts that I hope are useful to anyone deciding whether to dive in now or wait for the platform to become more stable.

By way of background, I have a fair amount of experience with both React on the web and native Android development. My interest in React Native isn’t primarily based on its use of Javascript (I’m actually using Kotlin for most of my recent native development, and find it a pleasant compromise between the wild west of dynamically typed languages and the cumbersome verboseness of Java) or even the interoperability with iOS, although that’s a nice bonus. My primary attraction to React Native is based on the React world view. Describing the UI declaratively as a function of application state just feels really clean, and I’ve used React long enough to know that it’s a stable and scalable solution. There are no existing libraries or frameworks on the Android platform that really target this same abstraction, making React Native a very attractive alternative.

I decided to implement a simple Hacker News reader to put the framework through its paces. You can find the source on Github, although it’s not fully functional (reasons discussed below). The main view looks like this: 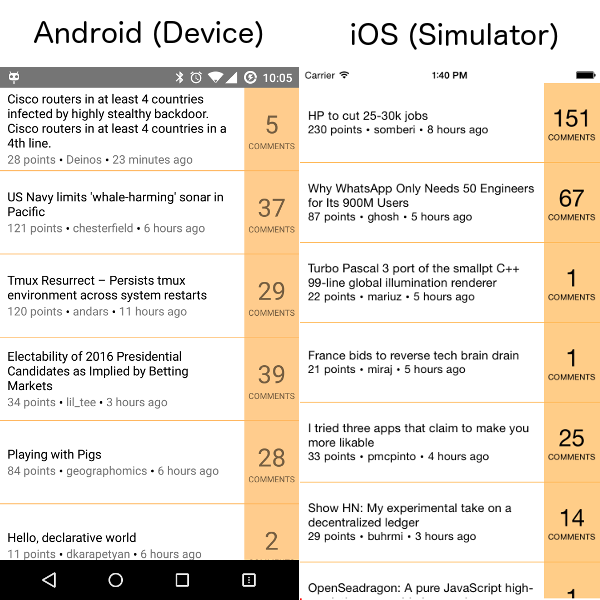 Getting started with React Native is easy. This isn’t a project that Facebook just threw over the wall to the community – there’s obviously been a real effort to document how to get everything working and make the process as painless as possible. Setting everything up and getting the “Hello World” app running on an emulator probably took about 20 minutes. I spent another hour on false starts trying to get the sample app to run and reload correctly on my physical android device, but it turns out there’s a guide for that too.

One thing worth noting is that all of the materials/guides Facebook provides are written from the perspective of writing a React-Native-first or React-Native-only application. I don’t think it would be hard to integrate React Native into an existing native application to render some or all views, but the primary use case the docs write towards is definitely RN-first. And for the most part, they make it easy to do. Beyond getting the emulator set up my existing Android knowledge wasn’t needed for anything (they abstract away everything about the Activity lifecycle – in fact your entire app lives within a single Activity). A familiarity with React, on the other hand, was essential.

With a project as new as React Native for Android, there are bound to be things that aren’t documented or just plain don’t work. I ran into a number of these as I tried to build my app. Bear in mind that I wasn’t trying to do anything crazy, just arrange standard UI components on a screen.

Let me preface this by saying I have a lot more issues with the standard way of doing Android development than with React Native. That said, there are a couple of concerns I have with it besides the growing pains listed above.

Despite the hiccups, I’m still as excited about React Native as I was at the start. It lives up to its promise of making native development more rapid and enjoyable, while bringing a powerful new UI paradigm to the table and opening up mobile development to a new class of developers. I have no qualms about saying that it is enormously better than what came before.

That said, I won’t be rewriting any production applications in React Native just yet. There are enough gotcha’s and unanswered questions still around that I would rather give the developers a few more months to sand down the rough edges before betting the farm.